There are two large new lakes being proposed in Fannin County and both are in the process of becoming a reality in the next 10 years.

The Lower Bois D’ Arc Creek Reservoir – North Texas Municipal Water District.
Fannin County will undergo some great changes in the coming years as the population grows as projected. Fannin County’s current population of 34,000 is expected to grow to 83,000 within 50 years. Along with new roads, homes and schools, there is a need for more water to sustain this growth. The North Texas Municipal Water District (NTMWD) in partnership with the City of Bonham is building a water treatment plant to serve Bonham.

Lake Ralph Hall Proposed Lake Ralph Hall will provide approximately 30 million gallons of water per day (mgd), plus about 15 mgd of reuse for the Upper Trinity service area, the City of Ladonia and Fannin County.

Bonham State Park has a lovely 65 acre lake set in the midst of a beautifully wooded 261 acre park with camping, picnicking, fishing, boating, hiking, mountain bike trails, and group barracks.  Bonham State Park opened in 1936 has a long history of recreation and service for Fannin County residents and visitors alike. Bonham State Park was built by the Civilian Conservation Corps, in the early 1930’s, and the original stonework buildings, built by the CCC, is still in use and adds historical interest to the natural beauty of the park.

Directions: From Bonham- Hwy 78 South to FM 271 continue two miles southeast on FM 271 to Park Road 24.
Fees: $3 per day, per person 13 and older. Camping Fees and Group Reservation Info
Contact: 903-583-5022
Lake Bonham is a 1,282 acre city owned lake located just six miles north of Bonham on FM 273 (Formerly FM 898)/Rec Rd 3.  Lake Bonham offers camping, fishing, swimming, boating, 9 Hole Par 3 Golf Course, Concession Stand, pavilion rental, campsites and water skiing. Boating Permit required for all boats and water crafts. Directions: From Bonham Hwy 78 North to FM 273
Fees: Golf,Pavilion, Rental Info, etc
Contact: 903-583-8001 or 903-583-7555
Additional Links:
Lake Coffee Mill  750 acre lake located in the Caddo National Grasslands and is owned and operated by the United States Forest Service for recreational purposes including boating, camping, and fishing.  The Coffeemill Recreation Area was completed in 1968 with additional major construction done by volunteers in the early 1990s. Coffee Mill lake supports the highest crappie population in an eight-county fisheries district. Hybrid Bass, Catfish, Crappie, and Blue Gill are restocked regularly
Directions: From Honey Grove, Texas, follow FM 100 north 12 miles to FM 409.  Turn left and go west 5 miles to camp entrance on the left.
Fees: Day use fee is $2 per vehicle, per day. Camping is $4 per night
Contact:United StatesForest Service 903-378-2103.
Additional Links:
http://www.fs.fed.us/r8/texas/recreation/caddo_lbj/coffeemill.shtml
http://www.tpwd.state.tx.us/fishboat/fish/recreational/lakes/coffee_mill/
Lake Crocket is a 450 acre lake is located in the Caddo National Grasslands.  Camping, fishing, and limited hunting in season are the major recreational opportunities for the area. Bird watching and hiking have increased in recent years. West Lake Crockett has 12 parking spurs and campsites. RVs are welcomed, and tent camping is available at each site. Visitors may fish from the shore, and hiking trails are accessible from this campground. No electricity or sewage dump facilities are available at the site. Located on the northeast shore of the 450-acre Lake Crockett, East Lake Crockett Recreation Area was completed in 1968. Lake Crockett was built in the 1930s and has provided recreational opportunities to its visitors for many years. The lake is stocked with catfish, sunfish, crappie and bass. No pack or stock animals are allowed in this area, but there are other areas on the Caddo where this kind of recreation may be pursued. Visitors are reminded to keep their pets on a leash and that glass containers are not allowed. This is a fee area.
Directions: From Honey Grove, Texas, follow FM 100 north 12 miles to FM 409. Turn left and go west 2 miles to the camp entrance on the left
Fees: ?
Contact: National Forest Service at 903-378-2103
Additional Links: http://www.fs.fed.us/r8/texas/recreation/caddo_lbj/eastlakecrockett.shtml
http://www.fs.fed.us/r8/texas/maps/forest_map_bois_2005.pdf
Lake Fannin is a 45-acre lake, created in 1938, and was the pride of Fannin County in the 1940’s. On July 22, 1940, the Bonham Daily Favorite wrote: “The entrance…resembles a scene plucked from a travel folder and placed in a perfect setting of rolling hills. Many thousands visit Lake Fannin during the summer months, play in its inviting waters, dance in its lodge, breathe its invigorating air and go home refreshed and ready for another struggle with a workaday world.” Many senior residents of Fannin County remember the fun and family reunions held out at the lake with visitors from all over the world. Although, there are many historical pictures and references to the popularity of Lake Fannin many younger residents had never even seen Lake Fannin due to the closing of the lake to the general public by the US Forestry Service. Lake Fannin has once again become important to Fannin County with the blood, sweat and volunteerism of people who are bringing it back to it’s former glory. Under a U.S. Forest Service volunteer program called “Passport in Time,” volunteers are working to restore the lake and its historic buildings. Lake Fannin is now listed with the National Register of Historic Places. For more information visit www.lakefannin.org or the National Forest Service at 903-378-2103.
The Lake Fannin Wilderness Park Texas Inc. meets the 4th Thursday of each month at the Lake Fannin Lodge at 6:00 PM.  The public is invited!  For information call Sue Page @ 903-583-0266 or Gabe Parker @ 903-583-7708
Directions: From Bonham – Hwy 78 North to FM 273. Go appox. 10.8 miles and take a left on to FM 2554. Follow signs to Lake Fannin Entrance
Fees: Primitive camping is available.     $10.00 per night per tent
Boy Scouts, Girl Scouts, and 4H Clubs activities by reservation only, no fee
Additional Links: Lake Fannin Bike Trail Map, Lake Fannin Map
TAMU Real Estate Talk

Texas counties among those with largest population gains since 2010 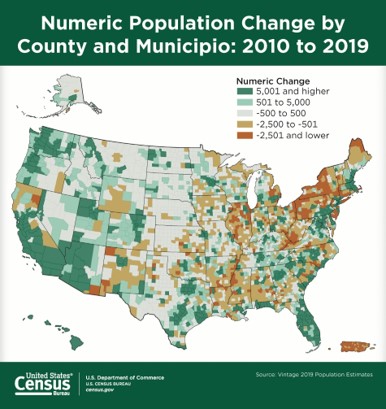 WASHINGTON – Six of the ten counties with the largest population gains this decade were in Texas, according to the U.S. Census Bureau’s ne​wly released July 1, 2019, population estimates.

Harris, Tarrant, Bexar, Dallas, Collin, and Travis Counties had some of the largest numeric population gains since 2010.

On the list of top ten fastest growing counties by percentage since 2010, Texas had more counties than any state. Hays, Comal, Kendall, and Williamson all made the list.

Over half (53.6 percent) of U.S. counties​ were smaller in 2019 than they were in 2010. Most small counties lost population this decade while most large counties gained people.

The Real Estate Center has a wealth of economic information online for free.

According to the San Antonio Board of Realtors, home sales rose 8 percent over the year to 2,282 homes in February. The month ended with 2,823 sales pending.

Fluctuation in mortgage rates and uncertainty about job security and the economy due to the COVID-19 crisis will result in a slower-than-normal spring selling season, according to Meyers Research Chief​ Economist Ali Wolf.

Situated on 11.9 acres at 18707 Egret Bay Blvd., the property offers one to three-bedroom units.

The Real Estate Center​​​​ has more information like this online for free:

​​TOMBALL – PDGL Partners LP has purchased 2.8 acres in the Tomball Business & Technology Park for the development of a 39,000-sf industrial project.

The multi​​tenant office/warehouse property will be constructed on a speculative basis.

Groundbreaking is set for late this year. 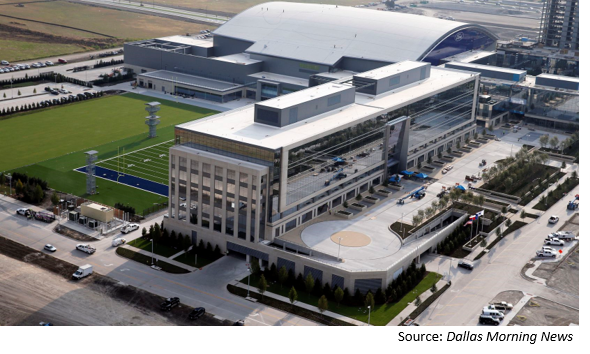 FRISCO – ​​Blue Star Land is adding an 11-story office tower to its $1.5 billion Star development at the Dallas North Tollway and Warren Pkwy.

The 327,000-sf building will have an attached six-level, 1,200-space parking garage. It will be on the west side of the tollway next door to ​the new Twelve Cowboys Way apartment tower.

Designed by Dallas-based HKS, the tower will be the third in the Star.

The Real Estate Center has more on DFW's office market: